"[The holy well] is small and unpretentious . . . in the well itself [is] a mat of pondweed, called in Irish luibh gan athair gan mháthair (“fatherless motherless plant”) because of its seeming lack of roots."

"Yes, there is great melancholy in a deserted land, though the beauty remains untouched—miles and miles of Killarney—the lake water lapping at the stones . . . And we went to the wishing well, where there are broken cups as offering & half a rosary . . . How ramshackle and squalid the Irish life is, how empty and poverty stricken." 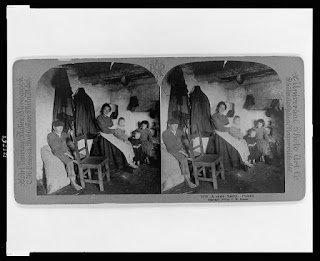 In my manuscript Dark White (my "Irish book," though it is more than that), I quote Virginia Woolf writing about Ireland in a letter: "It is a lovely country, but very melancholy, except that the people never stop talking."

For more context, I have been reading Woolf's diary entries during her visit to Ireland in the spring of 1934 (when my father, son of an unmarried Irish servant in Boston, was two). More than a hundred years after the Easter Uprising, I recognize the Irish and the Ireland she describes here; but I see it all from such a different perspective.

"To copy down conversation is not very interesting. People say the same thing over and over again. I would like to describe the perfection of Irish conversation.  . . . However I can give no notion of the flowing, yet formed sentences, the richness and ease of the language; the lay-out, dexterity & adroitness of the arrangement . . . "

"Mrs. F. is one of those blunt-nosed parted-haired Irish women with luminous brown eyes & something sardonic & secretive in her expression. Talk is to her an intoxicant, but there is as Mr. Rowlands said, something about the I[rish]; quite cold indifferent sarcastic for all their melody, their fluency, their adorable ease & forthcomingness. She is very much on the spot, accurate, managingly shrewd, hard-headed, analytic. Why aren’t these people the greatest novelists in the world? With this facility, this balance, this fundamental—"

About Ulysses, published in 1922, Woolf wrote to T. S. Eliot, “Never did any book so bore me.” She had dismissed James Joyce as “a self-taught working man … egotistic, insistent, raw, striking, & ultimately nauseating.” “When one can have cooked flesh,” she wrote, “why have the raw?” (The literature of the colonizer was well cooked, I guess.) Woolf also disliked British working-class novelist George Gissing, who lived near Clerkenwell, the prison bombed by Fenians in 1867. Ireland had been under British rule since 1603. After the war for independence and a brutal civil war, Ireland became a Free State and then a Republic, albeit a partitioned one, the North remaining part of Great Britain.

Woolf writing in her diary in Dublin in May, 1934:

"It is very windy wet & cold, and I am sitting alone . . . we lunched at the Shelburne . . . I heard Irish for the first time . . . the air of inferiority sleeps or simpers or sneers or rages . . . a sudden sense came over me of being in the midst of history—that is of being in an unsettled feverish place, which would have its period given in the books; anything may happen. Yet what can happen when . . . there’s only boiled potatoes in the biggest hotel in Dublin? Everywhere they seem to be living on watered wine . . . "

The subaltern behavior of the Irish intrigues, mystifies, frustrates, and repulses Woolf all at once, reminding me of a letter from Wallace Stevens to his wife dated May 1, 1918, when he was on a trip in the Jim Crow South:

Last evening a train of negroes that had been drafted passed through Johnson City on the way to camp. The station was crowded with negroes. When the train pulled in there was burst of yelps and yells. The negroes on the platform ran up and down shaking hands with those in the cars. The few white people who happened to be near took an indulgent attitude. They regard negroes as absurdities. They have no sympathy with them. I tried to take that point of view: to laugh at those absurd animals, in order to understand how it was convenable that one should feel. But the truth is that I feel thrilling emotion at these draft movements. I want to cry and yell and jump ten feet in the air; and so far as I have been able to observe, it makes no difference whether the men are black or white. The noise when the train pulled out was intoxicating. 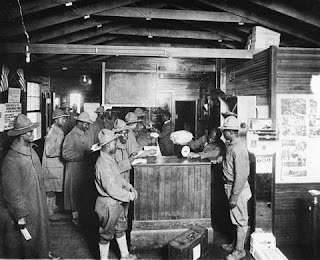 Now about that jar in Tennessee . . . 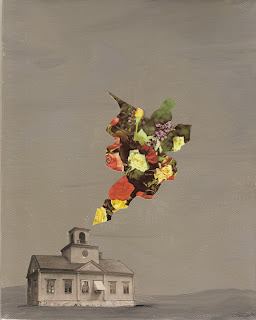 Linda Norton
I have two blogs: THE PUBLIC GARDENS, and a newer one, THE DAYS, a blog about dairies, journals, and the diurnal (with recourse to some letters and memoirs). Notebooks are a part of both of my books, THE PUBLIC GARDENS: POEMS AND HISTORY (2011) and WITE-OUT (LOVE AND WORK) (forthcoming)